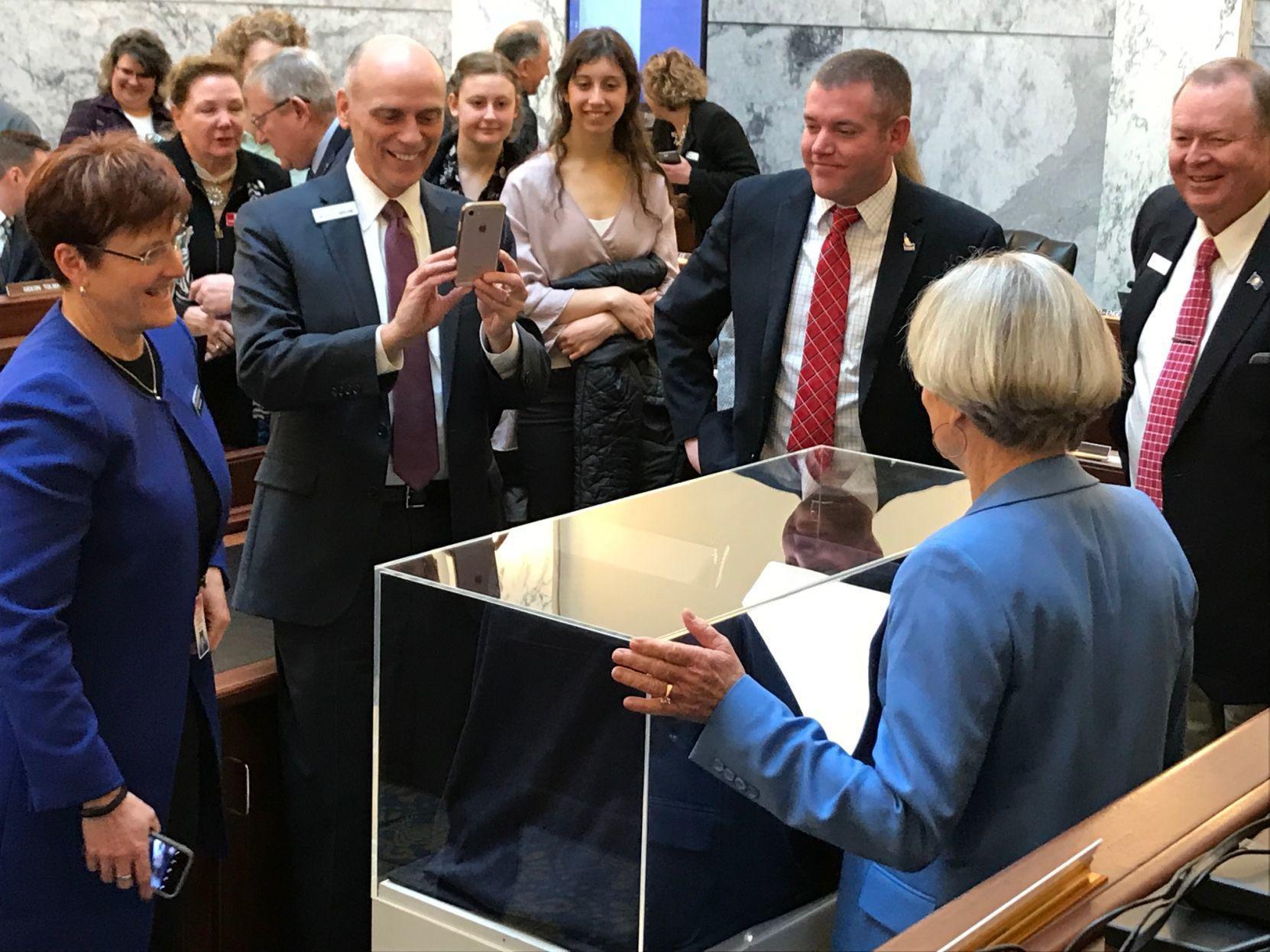 Members of the Idaho Legislature’s joint budget committee pose for photos with the original Idaho Constitution. The document, which needs restoration work, was displayed to lawmakers at the close of the budget hearing for the Idaho State Historical Society on Tuesday, Feb. 5, 2019.

The original Idaho Constitution was on display in the Capitol today, but the aging, hand-written document has seen better days.

The animal-glue adhesive binding has failed, and most of the text block has detached from the spine holding it together. An old lamination applied to the first two pages caused warping, distortions and an odd bleeding of red ink. Grime and tears are visible on many of the pages.

Janet Gallimore, Idaho State HIstorical Society director, said a careful restoration is in the works including removal of the cellulose acetate lamination on the first two pages that’s damaging the document; surface cleaning and humidifying; flattening of pages that have gotten crinkled over time, and much more. The project includes creating a research index of all the people who signed the 1889 document, assessment and documentation of everything about the original Idaho Constitution, a new leather cover and decorative box and an exhibition cradle.

Plus, it includes creating an exact traveling replica, which, unlike the original document that set the framework for the then-new state of Idaho, can easily travel around the state for all to see. The original is kept in a special, temperature and humidity-controlled vault.

Gallimore, who had the original Constitution wheeled in to the Joint Finance-Appropriations Committee’s hearing room this morning at the close of her agency’s budget hearing, said the $25,000 needed for the project already has been successfully raised by the Foundation for Idaho History — it’s not in the budget request.

“We just raised the money,” she said. You can read my full story here at idahopress.com (subscription required), or pick up Wednesday’s Idaho Press.

The restoration work will be done at a special laboratory in Utah. And when it’s done the Constitution and its story will be more accessible to Idahoans across the state, Gallimore said.

The Historical Society came before lawmakers today at a high moment, with the newly renovated and expanded Idaho State Museum having opened this fall to high visitor counts and great acclaim. The $17 million project was completed with a combination of state and private funds, including $4.3 million raised from donors, the largest capital campaign the state historical society ever has run.

Gallimore noted that last year, the society requested $1 million to get contracts signed as donor money was coming in; that came in on time, and it’s now reverted that $1 million back to the general fund. “We raised what we promised above and beyond that, and we’re very proud to do that for the state,” she said.

Gov. Brad Little is recommending just a 0.7 percent increase in state general funds for the Historical Society next year; the society had requested a 24.8 percent increase. He recommending funding for an additional maintenance craftsman to be stationed at the busy new state museum, and an additional educator there, along with a security and vulnerability assessment the agency had requested for a dozen buildings it oversees across the Treasure Valley.

Little didn’t recommend a new computerized system to access state historic preservation records; an inventory of historical artifacts and documents held at a state storage facility on the Idaho Transportation Department campus in Boise; or several other positions the agency requested; he also passed over a request to boost pay for highly skilled positions the agency has had trouble filling, including the state archaeologist.

Gideon Tolman, analyst with Little’s Division of Financial Management, said the proposal to boost pay, which would have tapped the anticipated increased revenues from the now-busy state museum rather than state general funds, is something the governor wants to analyze further.

“This item is … counting upon raised funds from the museum which the agency anticipates will come in, but have just begun to come in at this point,” Tolman told JFAC. “The governor recommends waiting to see if the vacancies are an ongoing issue, and if teh museum revenue comes in.”

Asked about the vacancies, Gallimore said the state archaeologist is a particular concern; the State HIstoric Preservation Office is required by law to carry out preservation activities, and it has been down to two archaeologists with no chief one for a year now. “The workload is significant,” she said. “We need a lead person.”

The state Constitution was displayed to lawmakers with two pages visible: The one requiring a balanced state budget, and another that shows the damage that needs repairing.

After being displayed to the joint budget committee, it was scheduled to be shown in both the House and Senate chambers this morning.

JFAC will set budgets for the Historical Society and other state agencies in the coming weeks. The joint committee released its budget-setting schedule on Tuesday; it calls for setting the public school budget — the single largest slice of the state budget pie — on Feb. 18.

Betsy Z. Russell is the Boise bureau chief and state capitol reporter for the Idaho Press and Adams Publishing Group. Follow her on Twitter at @BetsyZRussell.
Original Article