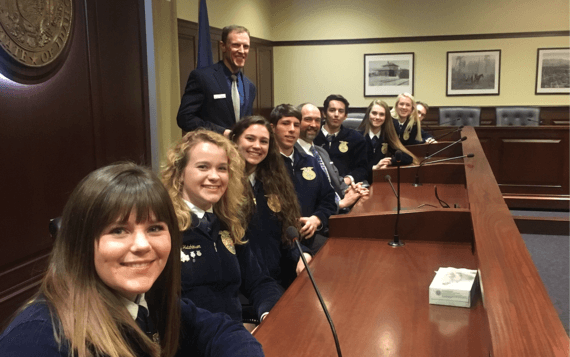 Wearing their traditional blue jackets, hundreds of Idaho FFA members from around the state met with Legislators and agricultural industry leaders for their annual Cenarrusa Day on the Hill. This event allows FFA members the opportunity to learn in person how public policy is formed by the Legislature.

This annual event is named after Idaho’s former Secretary of State, Pete Cenarrusa, who passed away in 2013. Cenarrusa began teaching ag classes at Cambridge and Carey High Schools. He went on to serve in Idaho’s Legislature and in the executive branch of State Government; he served a total of 51 years, making him the longest serving public servant in Idaho’s history. His widow and wife of 66 years, Freda Cenarrusa, attended the FFA awards luncheon.